CSP is used to produce electricity (sometimes called solar thermoelectricity, usually generated through steam). Concentrated-solar technology systems use mirrors or lenses with tracking systems to focus a large area of sunlight onto a small area. The concentrated light is then used as heat or as a heat source for a conventional power plant (solar thermoelectricity). The solar concentrators used in CSP systems can often also be used to provide industrial process heating or cooling, such as in solar air conditioning.

Different types of concentrators produce different peak temperatures and correspondingly varying thermodynamic efficiencies, due to differences in the way that they track the sun and focus light. New innovations in CSP technology are leading systems to become more and more cost-effective.

Solar thermal can fulfill a substantial amount of heat demand in industrial and agricultural food processes within any given country and irrespective of the geographical location. In developed economies, solar thermal can provide technically about half of this energy consumption by supplying hot water and steam in a temperature range of up to 400°C. In developing countries, especially in those where agriculture, the textile, brick and food processing industries are important sub-sectors, solar thermal energy can provide hot air and hot water needed for curing, drying, dyeing, washing, boiling, pasteurisation and sterilisation.

In general, there are three groups of solar thermal technologies that are useful for industrial process heat: solar air collectors, solar water systems, and solar concentrators.

For medium temperature process heat applications, some advanced FPC designs with ultra-high vacuums are available to provide temperatures up to 200°C. However, the main technology used for medium temperature heat are solar concentrator technologies. In the simplest case, compound parabolic concentrators (CPCs) are fitted behind the vacuum tubes of the ETC, reflecting both direct and diffuse sunlight onto the absorber (also called CPC vacuum tubes). Similar concentrators can be used for FPC. Depending on the configuration of the mirror, concentration factors of up to 4:1 can be achieved, although typically CPC concentration is around 1.5 or lower. Combined with ultra-high vacuum technology, these ETC can provide nominal temperatures up to 200°C. Other solar concentrators for process heat are similar to technologies used to produce concentrated solar power (CSP), except that in most cases, they are smaller in size (from 10 kW to 2 MW). Instead of using the heat to produce power however, the heat is directly used in industrial processes. Examples of solar concentrators are parabolic dishes (with flat or curved glas, fixed or moving focus), parabolic trough concentrators and Linear Fresnel collectors. The concentrators can use various shapes (e.g. troughs, cylindrical discs,mirror-strips) to concentrate the sunlight onto the absorber.

Parabolic dishes were already used in antiquity, and consist of a parabolic reflec­tor dish focusing sunlight onto the focal point in front of the dish. The dish can consist of flat mirrors attached to wooden, steel or aluminium frames. Some dishes are static and need to be manually adjusted (2-3 times a day) to follow the sun, while others track the sun automatically. One particular design is the Scheffler dish, which was popularised in India. Another example is the ARUN-160 dish, a two-way tracking parabolic dish with an aperture area of 160 m2, weighing around 20 tonnes and generating 100-120 kg of steam per hour (between 80-100 kW of thermal output) (Clique Solar, n.d.).

Linear Fresnel collectors are similar to parabolic trough collectors, except for mirrors that are placed on a horizontal surface at different angles to a fixed re­ceiver located several meters above the mirror field. Furthermore, for industrial process heat production, Linear Fresnels often need to be adapted to available rooftop and land areas around the industrial site, resulting in different lengths of collector rows and different orientations. These high-concentration collectors can produce temperatures up to 400° C and are extremely interesting for industrial process heat applications. Renewed interest  in these technologies has led to new prototype development in several research institutes around the world and they are becoming more popular, especially for district heating and cooling.

The choice of heat transfer fluid becomes important for medium temperature requirements in solar process heat technologies. Direct systems (or open-loop systems) can use water or air as the heat transfer fluid directly in their processes. However, air has a low heat capacity and water a low boiling point and may be corrosive or deposit minerals in the collector. In indirect systems (or closed-loop systems), some alternative heat transfer fluids are glycol and hydrocarbons (with lower freezing points suitable for cold climates), refrigerants (with high thermal capacity but with low boiling points), molten salt (with typical melting point above 140°C and high thermal capacity), or advanced heat transfer fuels (enhanced performance but also more costly). Other considerations are the costs of the heat transfer fluid, degradation (due to higher temperatures) and the viscosity (higher viscosity means more energy required for pumping).

The selection of an appropriate solar collector basically depends on five factors: 1) operating temperatures; 2) thermal efficiency; 3) energy yield; 4) cost; and 5) the space occupied. Other aspects, such as the possibility of roof integration or system size, also have to be considered. Furthermore, the choice depends on the technology used to provide the heating or cooling services.

Global scenario of adoption or demonstration of the technology

Despite these achievements, the global solar thermal market has faced challenging times in recent years. This is especially evident in the large markets in China and Europe where the traditional mass markets for small-scale solar water heating systems for single family houses and apartment buildings are under market pressure from heat pumps and photovoltaic systems. In total, the global market declined by 4.2 % in 2017. Positive market developments were recorded in India (26 %), Mexico (7 %),and in Turkey (4 %). In contrast to the small-scale solar water heating systems, the megawatt-scale solar supported district heating systems and industrial applications have gained increasing interest all over the world in recent years and several ambitious projects have been success fully implemented.

The world’s largest plant for solar district heating is located in Silkeborg, Denmark and has an installed capacity of 110 MW (156,694 m² flat plate col lec tors). The start of operation of this plant was in December 2016.

Important to note is that in 2016 and 2017 three parabolic trough collector fields were installed for feeding into district heating networks in Denmark and China. The concentrating collector area of these three systems installed adds up to 110,929 m².

Solar Heat for Industrial Processes (SHIP) continues to be a growing market. A number of promising projects have been implemented in the last couple of years ranging from small-scale demonstration plants to very large systems with 100 MW capacity. At least 624 SHIP systems, totalling 608,994 m² collector area, were in operation at the end of the year 2017.

2017 was a record year for SHIP installations – 124 new larger systems, total ling 192,580 m² collector area, started operating. With this, the documented world total grew in 2017 by 25 % in number of installed plants and by 46 % by installed collector area. The world’s largest solar process heat application began operation in February 2018 at the Amal oil field located in the south of the Sultan ate of Oman. The Miraah parabolic trough plant with a total capacity of over 100 MW delivers 660 tons of steam per day for the extraction of viscous or heavy oil as an alternative to steam generated from natural gas.

Global concentrating solar thermal power (CSP) capacity reached 4.9 GW in 2017, with South Africa being the only country to bring new CSP capacity online (100 MW). However, at year’s end about 2 GW of new plants was under construction; China (300 MW being built) and Morocco (350 MW) were particularly active. An estimated 13 gigawatt-hours of thermal energy storage (TES) was operational, and most new plants are incorporating TES. Spain remained the global leader in existing CSP capacity – followed by the United States – with Spanish CSP plants achieving record electricity generation in 2017. The year also saw record low CSP tariffs being bid and/or awarded in competitive tenders in Australia, Chile and the United Arab Emirates, where a 700 MW CSP tender was awarded. CSP with TES emerged as a viable competitor to fossil fuel thermal power plants. Price reductions were driven by competition as well as by technology cost reductions aided by ongoing research and development activity in the sector.

India added 0.9 GW (1.28 million m2) in 2016, an increase of 6% relative to 2015.The market appears to be bouncing back, following a temporary reduction in demand that resulted from the suspension of India’s national grant scheme in 2014. The share of imported vacuum tubes grew to 88% (up from 82% in 2015).This segment included an increasing number of vacuum tubes backed with aluminium mirrors (so-called compound parabolic concentrators), which are used primarily for industrial process heat applications. This trend was supported by a national 30% capital subsidy scheme for concentrating solar thermal technologies, which has reduced the payback times to three to four years for manufacturing businesses. Only 0.11 GW of flat plate collectors (down from 0.15 GW in 2015) was sold by the handful of manufacturers that remains in India

India was the lead country and 61% of its solar thermal capacity was used for industrial process (including community cooking); in total, 78 commercial applications of solar concentrators (all parabolic dish collectors) were installed (88% for solar cooking) (Sun & Wind Energy, 2014). Furthermore, there are currently around eight projects using FPC, ETC and Linear Fresnel collectors for solar process heating (AEE INTEC & PSE, 2014) in operation. As the largest milk producer in the world, India’s dairy sector is also one of the most interesting application areas where up to 13% of process heat could be supplied by solar thermal (GIZ,2011). Out of the top ten companies supplying solar process heating plants, four are parabolic dish suppliers from India. An important driver for the deployment of solar concentrators in India are the capital subsidies (up to 60%) provided by the Indian Government and a UNDP-GEF project (Sun Focus, 2014).

Highlights of Projects commissioned in India for Thermal Process Heating:- 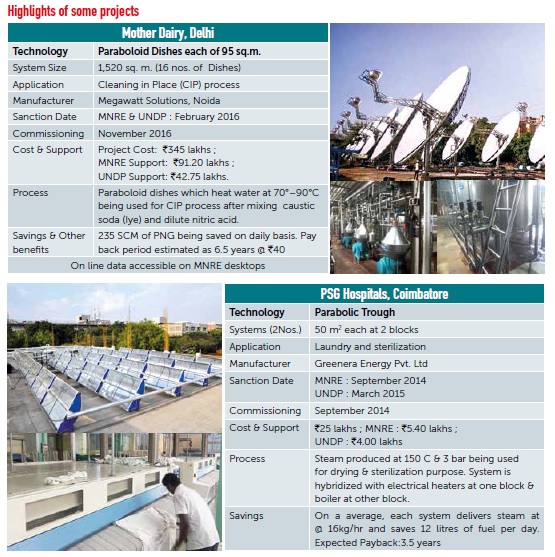 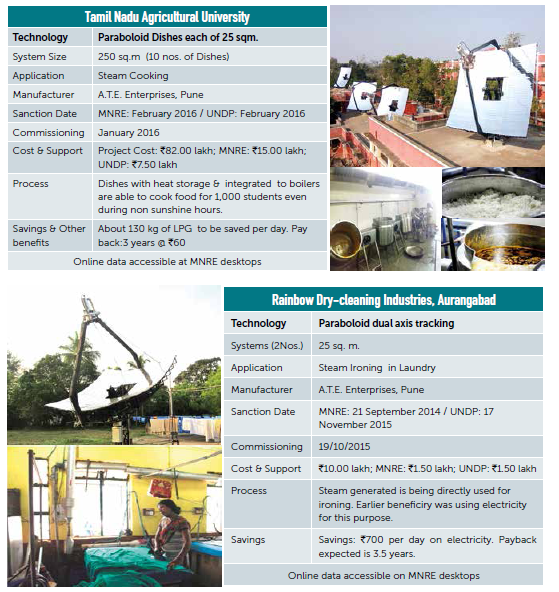 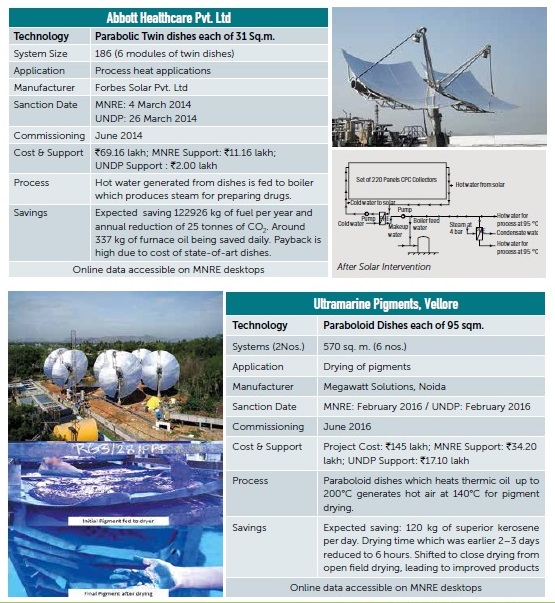 System Details: The total system has an area of 1168 m2 comprising of 40 concentrators with 16 m2 capacities each. The system was commissioned during 2009 by Gadhia Solar Energy Systems  Pvt. Ltd. Prior to the implementation of the CST system the establishment was using LPG as a fuel for its end use consumption. The system is integrated with its existing process. The project is set up at a cost of Rs. 106.2 Lakh with grant availed from MNRE of the order of Rs. 58.40 Lakh.

Timings & System Application Details: The system operates for 3 hours for preparation of breakfast. The daily quantum of food is around 200 kg of Rice. The system is functioning well. Usage of the system is approximately 4-5 hours / day and around 300 days in a year that also depends upon the availability of sunlight. 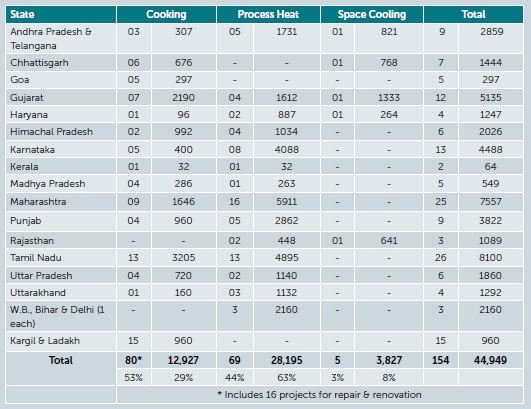 The schematic layout is shown below. Note that this is a sample picture of equipment arranged inside the kitchen. During solar hours, the incoming return oil from the vessels at reduced temperature will input solar field to gain the heat at desired temperature and then feed into LPG heater. Solar field will add the requisite ▲T based on solar radiation availability, and any shortfall from solar shall be made up by LPG based TF heater to provide the required temperature for cooking. During non-solar hours, a 3-way control valve will by-pass the solar field to isolate solar field. 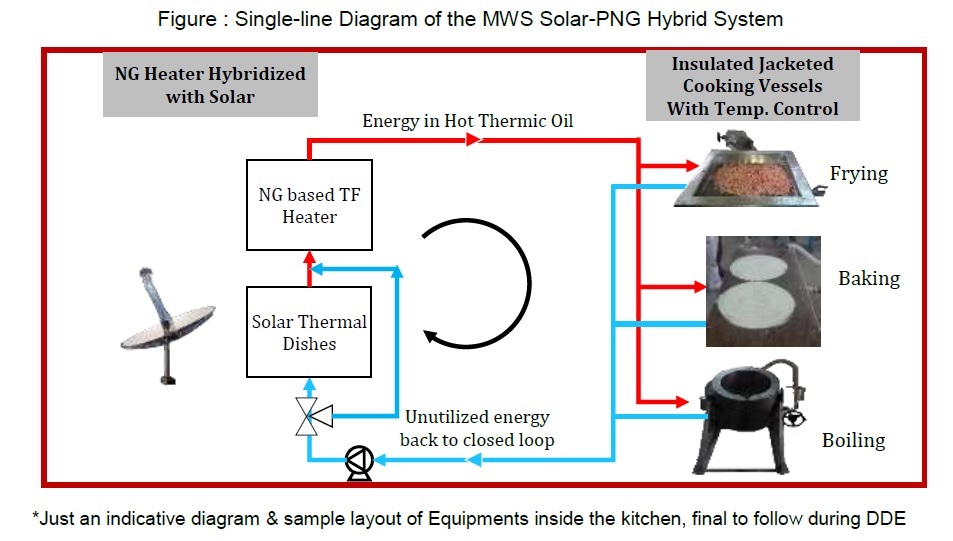 Content Owned, Updated and Maintained by JREDA. All Rights Reserved.